How to activate dark mode in WhatsApp and Messenger 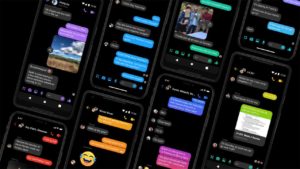 Dark modes are officially everywhere with almost all apps across all platforms now having a dark theme, should you want to activate it. Apple has a dark mode on iOS 13, Android 10 has a dark mode, and many apps such as Gmail, Reddit, Slack, Chrome, Google Maps, Google Keep, Google Photos, and Mozilla Firefox all have dark modes. There are many reasons people choose to go dark with their apps too, not least because it looks good. You can, according to Google, also save battery life on your smartphone if it has an OLED screen by activating smart mode and of course it’ll save your eyes should you be using your device at night.

If you’re running a device that doesn’t offer a system-wide dark mode, we’re here today to walk you through how to activate the dark mode in WhatsApp and Facebook Messenger.

Below we’ll give you quick and simple instructions on how to activate the night mode on Facebook and WhatsApp for both iOS and Android devices. Dark mode means that instead of having a light background with dark text, everything is flipped, with the text being white or sometimes other lighter colors like blue and the background being black or sometimes a dark blue.

How to activate the dark mode on WhatsApp

The WhatsApp dark mode has been a long-anticipated feature that we followed here on Softonic for quite some time. It was first added to the WhatsApp beta well over a year ago and WhatsApp users everywhere began to get excited. Then, inexplicably the WhatsApp dark mode disappeared from the advanced beta version of WhatsApp that the company uses to try test out features, but they receive a wider release. Nobody knew what was going on when that happened, but then out of nowhere, the dark mode feature appeared yet again and we were good to go.

All-in-all though, it was a very labored process bringing the dark mode to WhatsApp, but it is here now and if you like, you can go and activate it right now. To enable dark mode open WhatsApp and then got to the app’s Settings button before opening the Chats menu. When you’re here you need to click the Themes button, which will give you the three different options you can choose between. These are System default, which will match the theme you’ve set for your device-wide OS. If your OS is set to dark mode, WhatsApp will follow but if your device doesn’t have this setting, WhatsApp will remain in light mode. The other two options are Light and Dark, which will both set your WhatsApp’s theme accordingly.

What is WhatsApp Vacation Mode? ►

How to activate the dark mode on Facebook Messenger

The path to dark mode was much clearer for Facebook and Facebook Messenger but perhaps that isn’t surprising considering the dark history of the relatively new global behemoth. Facebook has a short but dark history filled with many a scandal having played a part in the skewing of Western Democracy with the Cambridge Analytica saga and even helped to play a part in stoking genocide in Myanmar. Yep, Facebook is a dark country, so it should be as no surprise that it has a dark mode.

Although the Messenger way of doing things is much simpler than the WhatsApp way, it wasn’t always this way. Originally, to activate the dark mode on Messenger, you had to send an emoji of a crescent moon to one of your friends and then tap it to open the secret dark mode menu. Thankfully, that isn’t the caser anymore, and activating dark mode on Facebook Messenger is literally as simple as flicking a switch.

How to activate Messenger dark mode ►

Everything you need to know about Messenger's unsend feature ►

How to see your chat history on Messenger ►

AliExpress: How to Detect Scams and Other Useful Tips